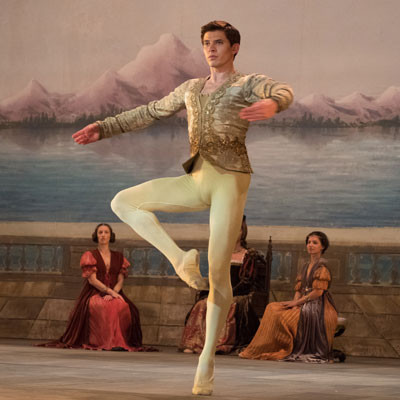 A great selection of films is now on sale for March and April at the Northampton Filmhouse, and with the increased flexibility of having a second screen, extra film screenings will be added to this schedule to meet demand. Brilliant new independent films include Simon Amstell’s bittersweet comedy Benjamin, Oscar-nominated foreign language drama Capernaum, and the road trip drama Burning Men, including a post film Q&A with director Jeremy Wooding. The cinema continues to present the best big new releases, including the magical Disney drama Dumbo, as well as the true story comedy Fighting With My Family and the Ralph Fiennes directed biopic The White Crow. Northampton Filmhouse also presents a selection of Tim Burton classics including Beetlejuice, Big Fish and Edward Scissorhands to celebrate the release of Dumbo. The programme of event cinema features screenings of top class drama, ballet and opera, plus a Gala Screening of The Great Escape hosted by Dan Snow and streamed live from London. 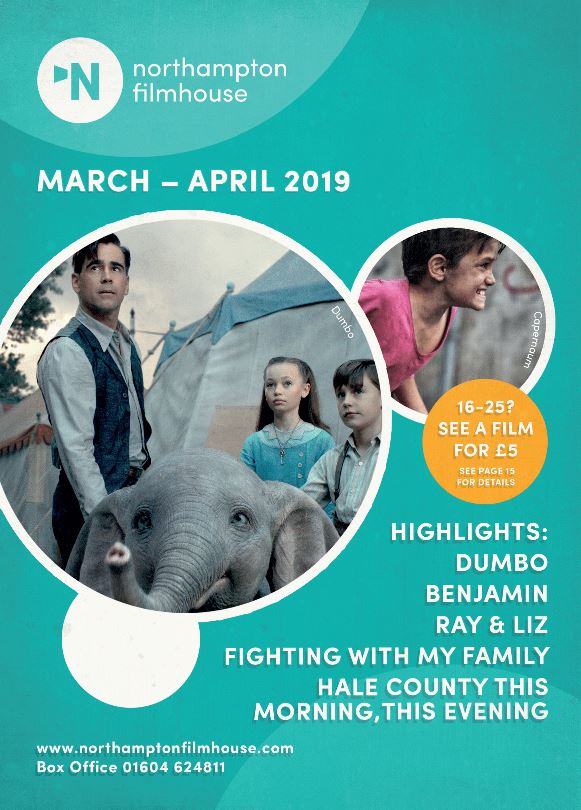 Northampton Filmhouse is also pleased to launch a new ticket price of £5 for those aged 16-25 with a special film screening of Shaun Of The Dead. The ticket price, valid on all regular screenings from Monday to Thursday, is supported by the BFI Film Audience Network, and is designed to encourage more young people to enjoy the cinema experience.

Over the coming months the cinema welcomes a selection of top independent movies including Benjamin, a bittersweet comedy about a filmmaker (Colin Morgan, Merlin) thrown into emotional turmoil by the release of his difficult second feature and an emerging romance. Simon Amstell makes his feature film directing debut. Capernaum is a nominee for Best Foreign Language Film at the upcoming Oscars, following a young boy who sues his parents for neglect. The film comes from director Nadine Labaki, who also stars in the film. Road trip drama Burning Men follows a pair of young, struggling musicians who unleash dark forces when they steal a rare Black Metal record. Local director Jeremy Wooding (Peep Show, Blood Moon) will appear in the Filmhouse after the film for a Q&A. British wartime drama Lancaster Skies follows a Spitfire ace who must take the place of a crew’s cherished skipper who was killed in action. The film is a loving homage to the classic British war films of the 1940s and ‘50s. Ray & Liz was a nominee for Outstanding British Debut at this year’s BAFTAs. From Turner Prize-nominated artist Richard Billingham, it tells the story of a married couple who live on the margins of society. Jellyfish follows 15 year old Sarah Taylor, whose hectic life is changed when she discovers she may have a hidden talent for stand-up comedy. Lead actress Liv Hill won Best Performance in a British Feature Film at the Edinburgh International Film Festival for her role in the film.

Other independent releases include Old Boys, inspired by the classic Cyrano de Bergerac story. Alex Lawther (The Imitation Game) stars as a pupil helping a handsome but dim school-hero pursue the fiery daughter of a visiting French teacher. Irish horror The Hole In The Ground follows a mother building a new life on the fringes of a rural town with her son which is disrupted by a terrifying encounter with a neighbour. The film premiered at this year’s Sundance Film Festival. Andrew Garfield stars in the mysterious Under The Silver Lake, in which he attempts to unravel a string of strange crimes to find a missing neighbour. From director David Robert Mitchell, director of popular cult-horror It Follows. American independent drama What They Had stars Hilary Swank and Michael Shannon as a family attempting to resolve long-simmering resentments. Charlotte Rampling stars in the foreign language drama Hannah, where she gives a powerful performance in which she portrays a woman’s loss of identity as she grapples with the consequences of her husband’s imprisonment. The Kindergarten Teacher tells the story of a teacher who is bored with her banal existence before becoming convinced that her five-year-old student is a budding poetic genius. From director Sara Colangelo, the film stars Maggie Gyllenhaal. Polish drama Nina follows a woman looking for a surrogate mother with her partner, however when they find the ideal candidate she finds herself falling for the woman. The film will be April’s screening in association with Q-Film Northants.

The latest big releases coming up at the Northampton Filmhouse include Disney’s Dumbo, from visionary director Tim Burton. The all-new, live-action adventure features an all-star cast including Colin Farrell, Eva Green and Michael Keaton. Stephen Merchant directs heartwarming comedy Fighting With My Family, based on the true story of WWE superstar Paige (Florence Pugh, Lady Macbeth). The film also stars The Rock, Nick Frost (Shaun Of The Dead) and Vince Vaughn. Ralph Fiennes directs and stars in The White Crow, a biopic about Rudolf Nureyev, widely regarded as the greatest male ballet dancer of his generation. The drama charts the iconic dancer’s famed defection from the Soviet Union to the West. Joe Cornish (Attack The Block) returns with a new take on the timeless legend of the mythical sword in the stone, Excalibur, with The Kid Who Would Be King. Keira Knightley stars in the emotionally charged wartime drama The Aftermath. From the director of Testament Of Youth, she plays a woman arriving in postwar Germany to be with her husband, before learning they will share their grand new home with its previous owners. Nicole Kidman gives a Golden Globe nominated performance in Destroyer as a LAPD detective scarred by her past. The film is directed by Karyn Kusama and also stars Toby Kebbell and Tatiana Maslany.

Other big releases include On The Basis Of Sex in which Felicity Jones (The Theory Of Everything) stars as the inspiring Ruth Bader Ginsburg. Directed by Mimi Leder, the film follows Ginsburg teaming with her husband (Armie Hammer) to bring a groundbreaking case before the U.S. Court of Appeals. Rosamund Pike gives a Golden Globe nominated performance as celebrated war correspondent Marie Colvin in A Private War. The film shows her as she embarks on the most dangerous assignment of her career alongside war photographer Paul Conroy (Jamie Dornan), and is directed by Oscar-nominee Matthew Heineman. Nicole Kidman and Russell Crowe star in Boy Erased as parents who send their son (Lucas Hedges, Manchester By The Sea) to a conversion therapy program after he is outed. The powerful film is directed by actor, writer and director Joel Edgerton (Loving). Fisherman’s Friends is a based-on-a-true-story British comedy from the writers of Finding Your Feet. The film tells the story of a music executive pranked by his boss into trying to make him sign a local group of shanty-singing seamen to their label and stars James Purefoy, Daniel Johns and Tuppence Middleton.

The Filmhouse also shows a range of documentary films, including Oscar-nominee Hale County This Morning, This Evening. From director RaMell Ross, it is an inspired and intimate portrait of a place and its people, following two young African American men from rural Alabama over the course of five years. Maiden tells the story of Tracy Edwards, a 24-year-old cook who became the skipper of the first ever all-female crew to enter the Whitbread Round The World Race in 1989. The screening will be followed by a satellite Q&A with Tracy Edwards. The Ponds follows a group of swimmers from London who swim in three ponds year-round as they laughed, sang, complained, ruminated, philosophised or simply sought respite from all that life threw at them. Scotch: The Golden Dram looks at the fascinating people who make Scotch whisky by journeying to the Scottish countryside to uncover the history of the craft and meet some of the biggest names in the industry.

The programme of films includes regular Dementia-Friendly screenings. Over the coming weeks there will be an afternoon screening of recent Disney sequel Mary Poppins Returns, starring Emily Blunt, on Friday 1 March. Also in March, there will be a matinee of 1944 classic Meet Me In St Louis, starring Judy Garland, on Tuesday 12 March. On Tuesday 19 March, there will be an early evening screening of ‘80s fairytale adventure The Princess Bride. All are welcome but an extra warm welcome will be extended to those living with early onset dementia and their families. In April, a matinee screening of ‘50s classic Singin’ In The Rain, widely considered one of the best musicals of all time, takes place on Tuesday 9 April.

The classics programme is supplemented with a range of screenings to celebrate the release of British comedies such as The Kid Who Would Be King and Fighting With My Family. Joe Cornish’s (The Kid Who Would Be King) Attack The Block is shown, starring John Boyega (Star Wars) and Jodie Whitaker (Doctor Who) who have to defend their turf against an invasion of savage alien creatures, turning a South London apartment into an extra-terrestrial warzone. Edgar Wright’s beloved Cornetto Trilogy screens, comprised of Shaun Of The Dead, Hot Fuzz and The World’s End, with Simon Pegg and Nick Frost (Fighting With My Family) starring in all three. Special ticket packages, one including the option of Cornetto’s, are available with these films. March’s screening in conjunction with The University of Northampton’s Cult Film Club is the 1980s comedy Withnail And I, starring Paul McGann and Richard E. Grant as two out-of-work actors who encounter the unpleasant side of the English countryside when they mistakenly take a holiday there.

Other classics include a selection of Tim Burton’s most enchanting classics to celebrate the release of Dumbo. Beetlejuice stars Michael Keaton as yellow-haired spirit Beetlejuice, enlisted with helping newlyweds Adam (Alec Baldwin) and Barbara (Geena Davis) after they’re killed in a freak auto accident. Ewan McGregor stars in the 2003 fantasy drama Big Fish. The film tells the story of a father and son, Edward and William, who have a strained relationship as Edward has always told exaggerated stories about his life. William sets out to unravel fact from fiction before it’s too late. Johnny Depp stars in 1990s classic Edward Scissorhands as an animated human being built by a scientist. When the scientist dies before he can finish assembling him, his scissor blades for hands make him an outcast.

Forthcoming theatre and event cinema highlights include the Met Opera’s La Fille Du Regiment, Laurent Pelly’s hilarious staging of Donizetti’s comic opera, and Die Walkure, which sees Philippe Jordan conducting Wagner’s classic opera. The Royal Opera House present La Forza Del Destino, in which Christof Loy directs a star-studded cast of singers, including Anna Netrebko and Jonas Kaufmann in Verdi’s epic opera. The Exhibition On Screen season continues with an encore of Rembrandt, a film that offers exclusive access to the major Rembrandt exhibitions in London and Amsterdam. There will also be a Gala Screening of The Great Escape hosted by Dan Snow. On the 75th anniversary of the daring real-life escape, he will be joined by special guests in a commemorative evening broadcast live to the Filmhouse, followed by a screening of the film.