A great selection of films is now on sale for July and August at the Northampton Filmhouse.

Over the coming months the cinema welcomes a selection of top independent movies including Only You, a sumptuous British romance from Harry Wootliff. The film stars Laia Costa (Victoria) and Josh O’Connor (The Crown, God’s Own Country) as a couple who meet whilst arguing for a taxi and start a passionate romance. Thunder Road features a stunning central performance from writer-director-actor Jim Cummings. He plays a police officer whose life is falling apart around him in the tragicomedy inspired by the Bruce Springsteen song. Dirty God follows the life of a woman who suffers an acid attack in London. With a fantastic lead performance from Vicky Knight, the film was nominated for a Grand Jury Prize at Sundance Film Festival. The screening on Monday July 22 will be followed by a discussion, part of a new series of discussion evenings, with more information available on the Filmhouse website. Mari follows a successful contemporary dancer preparing for a show before she finds out her grandmother is dying. The conflicting events are told in a powerful way through dance choreography by director Georgia Parris. My Days Of Mercy stars Kate Mara and Ellen Page as two people on opposing sides of a capital punishment. Despite their moral differences, they feel an obvious connection to each other. The film will be July’s screening in association with Q-Film Northants. 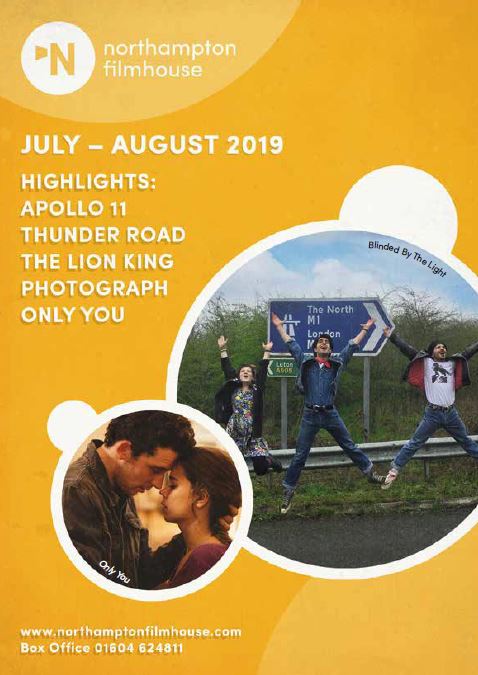 Other independent releases include The Captor, based on the absurd but true story of a 1973 bank heist and hostage crisis which gave rise to the psychological phenomenon known as “Stockholm syndrome”. The film stars Ethan Hawke, Mark Strong and Noomi Rapace. Regina King stars as a hardworking manager of a sports bar in Support The Girls. Over the course of a day, her and her team, which also includes Haley Lu Richardson, are tested. British director Peter Strickland (The Duke Of Burgundy, Berberian Sound Studio) returns with In Fabric, a film which follows the life of a cursed dress as it passes from customer to customer. The film stars Marianne Jean-Baptiste, Hayley Squires and Gwendoline Christie. Based on the novel of the same name, We The Animals follows three tearaway young children through their childhood as their parents share a volatile relationship. The film will be August’s screening in association with Q-Film Northants.

The latest big releases coming up at the Northampton Filmhouse include Blinded By The Light, starring newcomer Viveik Kalra as a British teen of Pakistani descent who finds a voice after discovering the music of Bruce Springsteen. The film is directed by Gurinder Chadha (Bend It Like Beckham). The much anticipated Disney sequel The Lion King comes from director Jon Favreau (The Jungle Book). The film is a live-action spectacular version of the iconic tale with a voice cast including Donald Glover, Beyonce, Seth Rogen and the returning James Earl Jones as well as a score from Hans Zimmer. Screenings for this film will be on sale at a date to be confirmed in the near future. Horrible Histories: The Movie is based on the beloved and best-selling and award-winning Horrible Histories book series, following a teenager sent to miserable, cold, wet Britain after he falls foul of Emperor Nero. The film stars Craig Roberts, Nick Frost, Rupert Graves and Kim Cattrall. Jim Jarmusch (Only Lovers Left Alive) directs The Dead Don’t Die, a zombie comedy with an all-star cast including Bill Murray, Adam Driver, Tilda Swinton, Steve Buscemi and many more. Gemma Arterton and Elizabeth Debicki star in Vita & Virginia as Vita Sackville-West, a brash diplomat’s wife who refuses to be constrained by her marriage, and Virginia Woolf. The two embark on a relationship in bohemian 1920s England which inspired one of Woolf’s greatest works.

The Filmhouse also presents the very best in world cinema, including Balloon, a German film based on a thrilling true story. In 1979, East Germany is at the height of the cold war. Two friends can no longer stand the oppressive regime, resolving to build a hot air balloon from scratch that will carry them over the border to freedom. Photograph comes from Ritesh Batra, director of The Sense Of An Ending and The Lunchbox. The film follows the lives of two Mumbai residents, a struggling street photographer and a shy stranger who develop a union that begins to develop in ways neither of them could have imagined. Never Look Away is a German drama that received two nominations at this years Oscars. The film follows a relationship of two German art students through the years, even when it’s threatened by devastating wartime secrets.

The Filmhouse also shows a range of documentary films, including Five Seasons: The Gardens Of Piet Oudolf, a documentary feature following decorated gardener Piet Oudolf as he takes viewers inside his creative process. Ibiza: The Silent Movie is directed by legendary music film director Julien Temple. The unique and innovative film takes a compelling audiovisual journey into 2,000 years of Ibiza’s bohemian history, with music from and curated by Fatboy Slim. Diego Maradona comes from Oscar-winning director Asaf Kapadia (Amy, Senna). The documentary feature follows the wild and unforgettable story of the iconic footballer with never-before-seen footage from his personal archive. Screenings for this film will be on sale at a date to be confirmed in the near future.

Other documentary features include Freedom Fields, the tale of three women and their football team in post-revolution Libya. The documentary feature shows the reality of a country in transition, as their aspirations collide with history. Speed Is My Need takes you inside the mind of a superbike racer. With spectacular footage, it explores what makes people risk their lives for the thrill of the speed in the face of unbelievable crashes. Apollo 11 is an astonishing cinematic space event 50 years in the making. The documentary shows never-before-seen, large-format film of one of humanity’s greatest achievements. What We Left Behind: Looking Back At Deep Space 9 shows extensive interviews with cast and creators to bring viewers an in-depth look at this beloved show, its fans, and its ongoing appeal to Trekkies of all ages.

The programme of films includes regular Dementia-Friendly screenings. Over the coming weeks there will be afternoon screenings of Pillow Talk, Yesterday and Rocketman. Pillow Talk is the Oscar-winning 1959 musical starring Doris Day as a woman who grows tired of her playboy neighbour and his succession of romances. Yesterday is Danny Boyle’s new musical drama following a man who wakes up from an accident to find out the rest of the world has forgotten the music of The Beatles. Rocketman is the popular biopic of Elton John’s life from the director of Eddie The Eagle, starring Taron Egerton. Our Dementia-Friendly screenings are open to all and offer people living with dementia, including early young dementia, the chance to enjoy a classic film in a relaxed and supportive environment.

The Filmhouse also announces new Relaxed Screenings. The screenings are subtly adapted to create a welcoming environment for people with a range of conditions in the neuro-diverse community and for those who prefer a more relaxed cinema experience. There will be no adverts or trailers before the film, with the sound turned down and the lights kept at a low level.

The Filmhouse also shows a selection of classics films, including those celebrating special anniversaries, including as well as two returning contemporary favourites as voted on by its audiences. Winner of the overall Audience Award was The Favourite, Yorgos Lanthimos’ Oscar-winning dark comedy. Winner of Best Independent Film From The Rest Of The World was Leave No Trace, Debra Granik’s celebrated tale of a father and son who have been living off the grid for years. Celebrating 50 years since the moon landing alongside Apollo 11 is contemporary classic Moon. Duncan Jones’ sci-fi stars Sam Rockwell as an astronaut looking forward to returning from a mission before his health takes a turn for the worse. Celebrating its 20th anniversary is 1999 sci-fi masterpiece The Matrix. Keanu Reeves stars as a computer hacker who finds out that none of what’s going on around him is real. When Harry Met Sally celebrates its 30th anniversary, following a couple through different stages of their lives. After Harry (Billy Crystal) and Sally (Meg Ryan) share a contentious car ride, they argue about whether men and women can ever truly be platonic friends. 1959 classic North By Northwest is Alfred Hitchock’s classic thriller. Cary Grant stars as a New York City ad executive who is pursued by a ruthless spy after he’s mistaken for a government agent. Apocalypse Now: The Final Cut is the 1979 classic from Francis Ford Coppola (The Godfather) starring Martin Sheen as a captain taking a perilous and increasingly hallucinatory journey to find and terminate a Colonel (Marlon Brando) who has reportedly gone mad. The film will be screened in a special 40th anniversary never-before-seen restored cut.

Forthcoming theatre and event cinema highlights include The Cold Blue, a tribute to the men who fought and risked their lives to help achieve victory 75 years ago. The special documentary event includes exclusive content and footage. The RSC present Measure For Measure, a new production of Shakespeare’s classic, directed by Gregory Doran and still astonishingly relevant. NT Live presents The Lehman Trilogy, the critically acclaimed and five-time Olivier Award nominated play, broadcast live from London’s West End as part of NT Live’s 10th birthday season. Glyndebourne presents Barber Of Seville, recorded live in 2016 with another chance to see Danielle de Niese playing the determined Rosina, and The Magic Flute, Mozart’s most magical comedy returning to Glyndebourne for the first time in a decade. The ever-popular Andre Rieu presents his 2019 Maastricht Concert Shall We Dance?, a celebration of the music of his heart: the Waltz. The Filmhouse also presents an eclectic selection of music events, such as Westlife: The Twenty Tour Live From Croke Park, a chance to see the record-breaking boyband broadcast live. The Cure: Anniversary 1978-2018 Live In Hyde Park is a chance to see the iconic rock band’s performance last July in London’s Hyde Park, in an immersive cinematic experience. Pavarotti comes from award-winning director Ron Howard (The Beatles: Eight Days A Week), celebrating the life of the beloved opera star Luciano Pavarotti, with a satellite Q&A and exclusive content following the documentary feature.